On the occasion of 8th of March, International Women’s Day, we want to celebrate the great commitment of Women to environmental protection, a very important theme for ISOIL Industria.
We remember some protagonists of international politics who carry out battles to protect our Planet.

We often talk about sustainability, without knowing that this term, in its current meaning, is due to a woman:
Gro Harlem Brundtland, Norwegian Premier and Head of the UN Commission responsible for drafting the “Our common future report”, published in 1987.
(to view the entire report click here)

Her work has been an important stimulus to develop a common critical awareness of the unsustainability of the traditional development model and to definitively overcome the traditional disconnection between economic growth and the preservation of Nature.

When we think of women committed to the environment, our thoughts immediately turn to the very young Greta Thunberg, Swedish activist champion of the Fridays for Future movement.
Known for her demonstrations held in front of the Riksdag in Stockholm, Sweden, with the slogan “Skolstrejk för klimatet“, or school strike for the climate, she has become the leader of social and non-violent activities of revolt against political negligence on the theme of global changes.

The first female vice president of the United States, Kamala Harris has set a reentry to the Paris Agreement.
She has created an environmental and climate justice office in the White House and has clashed with oil companies that had violated environmental legislation.

Another prominent figure is the mayor of Paris Anne Hidalgo, listed by Time as one of thee 100 most influential people on the planet; she has literally changed the face of Paris making the city increasingly green and with her 15-minute anti-traffic policy she has helped citizens to experience their neighbourhoods more. 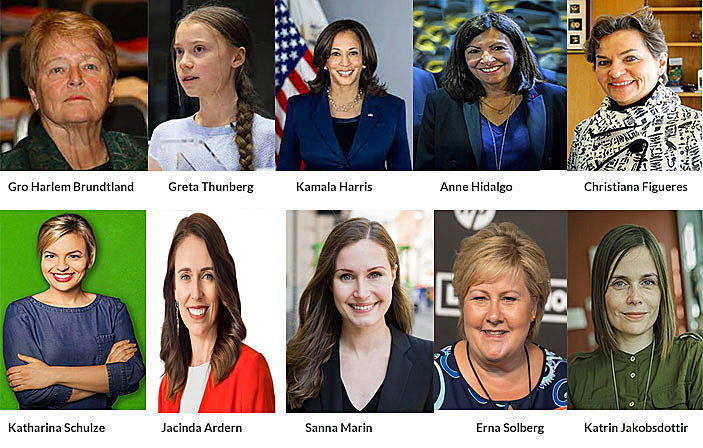 Much of the work behind the scenes of the Paris Agreement (the first universal and legally binding agreement on climate change) is due to Costa Rican Christiana Figueres; she held the position of Executive Secretary of the UNFCCC from 2010 to 2016.

The “green” politician that conquered Bavaria is the young and charismatic Katharina Schulze. Her proposal is that of a new environmentalism that does not aim only at ecology, but at a more equitable society.
The main objectives of her policy are the reduction of pollution caused by cars and support for greener companies.

And again, among the women committed to the defence of the environment we remember the prime minister of New Zealand Jacinda Ardern, who has approved a law to eliminate carbon dioxide emissions by 2050.

Finnish Prime Minister Sanna Marin, who at the age of 34 became the youngest government leader in the world, has made the fight against climate change the priority task of her government.
You have proposed the establishment of a state fund of 2 billion euros to aim for carbon neutrality by 2035.

Norwegian Prime Minister Erna Solberg is responsible for Norway’s shift towards clean energy.
If Iceland is confirmed as one of the least polluted in the world, part of the credit goes to Prime Minister Katrin Jakobsdottir. 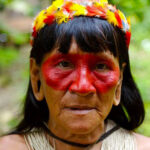 In addition to the women mentioned above, on the Day that celebrates women worldwide, we remember all the women who harsh struggles every day to defend the environment, suffering the consequences themselves; just think of the women who put their lives at risk to defend the Amazon from deforestation practices, who since 2016 have joined the Alliance of Amazonian Women.

Best wishes to the Women of ISOIL Industria and to All Women in the World!

Nuclear fusion: a historic breakthrough for unlimited energy
17 January 2023
Reducing energy costs and Co2 emissions with trigeneration and ISOMAG and ISONRG meters
22 December 2022
We look forward to seeing you at ECOMONDO and KEY ENERGY, the reference events for ecological transition
2 November 2022
How to make cooling in data centers more efficient
3 October 2022
Cookie Consent
To provide the best experiences, we use technologies such as cookies to store and / or access device information. Consent to these technologies will allow us to process data such as browsing behavior or unique IDs on this site. Not consenting or withdrawing consent may adversely affect some features and functions.
Manage options Manage services Manage vendors Read more about these purposes
Show preferences
{title} {title} {title}